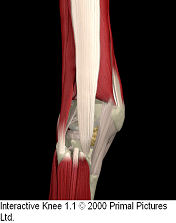 The iliotibial band is a strip of connective tissue that begins on the upper-outer surface of the thigh and extends down to the outside of the knee. As the knee bends this band will rub against the outside of the knee. Often this band can become tight which will cause the band to rub harder against the knee. Overtime this will lead to pain and injury. This condition is common in runners and cyclists, but can occur in the non-athletic population as well. Pain is typically felt on walking, especially down hill, and is relieve by rest. It is common to have an existing foot dysfunction such as hyperpronation with this condition as well.

We utilize Myofascial Release Technique (MRT)  and/or Graston Technique to release the tension in the iliotibial band and reduce the irritating friction that is responsible for the pain and inflammation. Low-intensity laser therapy may be used to help settle inflammation associated with ITBFS.  In addition to releasing the ITBand, further biomechanical evaluation will also need to be undertaken to identify why the ITBand become tight in the first place. Associated problems such as foot or hip dysfunction, muscle imbalance, and muscle weakness will also have to be addressed if present to ensure complete resolution of the condition.